“Our Father which art in Heaven…” So begins the Lord’s Prayer [Matthew 6:9-13 KJV], depicted here in hieroglyphs from the middle-Egyptian era [-2100 BCE]. “…Amen” – the ending of the prayer which means “so be it” – further invokes the ancient deity Amun who was worshipped in two major temples located in Uaset on the east bank of Africa’s northward-flowing Nile River. 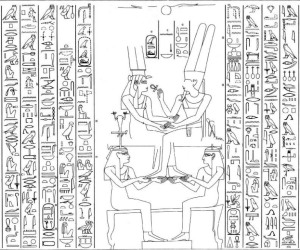 God Amun, Goddess Mut, and Montu (son of the Annunciation) have the historical distinction of being the highly popular Triad of Thebes [‘Thebes’ being the Greek term for Uaset]. Ipet Isut – meaning “the most selected of places” – nowadays referred to as the Karnak Temple, is the Triad’s Northern sanctuary. Ipet Resyt – meaning “the Southern sanctuary” – nowadays referred to as the Luxor Temple, is the site of the Annunciation from Amun to Mut regarding Montu, the Divine Son She is destined to bear [click picture on the left for link @ 1:17:20].

“A house has the character of the man who lives in it” ~ This proverb from Ipet Resyt provides insight into religions which were later derived from such ancient Mysteries to the extent that latter-day belief systems did indeed assume the egoic character, cultural biases, and imperialistic agendas of Africa’s foreign patriarchal conquerors. As such, this prophetic proverb understates what would inevitably become Africa’s subsequent experiencing of the “religiously-justified” Euro-patriarchal ravaging of Her spiritual, natural, human, and cultural resources through slavery [1619-], colonialism [1884-] and apartheid [1948-]; desecrating the Nile Valley Temple of the World (per God Djehuti) and beyond, while deploying derivative religious texts to usurp God Amun‘s spiritual standing as Founding Father. His standing lives on in the emancipatory leadership of Africa’s latter-day fathers who have refused to be contained within the characteristically deceptive dictates of a predatory, yet parasitic, alien house. The false matrix.

Below are words representing the resistance, wisdom & sovereign character of some of these African patriarchs:

4 Comments on “Our Father’s House”