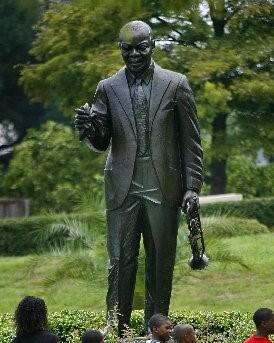 “The bloodlines of all important modern American music can be traced to Congo Square,” musician and trumpeter, Wynton Marsalis once said of this national treasure – the historic birthplace of jazz and Rhythm-‘n’-Blues. Situated in what is now the Louis Armstrong Park in Tremé, the oldest African-American neighborhood in the tricentennial city of New Orleans – at 2.35 acres, today Congo Square measures approximately half of what it was in its heralded 19th century years.

New Orleans, Louisiana [NOLA] is a major US port whose strategic location facilitates the trafficking of commercial goods between the Gulf of Mexico and the Mississippi River system, which historically included trans-Atlantic cargoes of enslaved Africans. Congo Square was a gathering place – hence cypher of cultural energies and traditional practices of these displaced people [largely BaNtu from Africa’s Kongo-Angola region] which profoundly and irrevocably came to influence America and the world at large. Jazz, the “most American” art form, was born out of the communication modes and creativity of those who 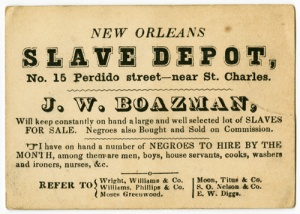 were brought to this port from 1718 through the 19th centuries under the auspices of French, Spanish, and then American rule…

Under French rule, two-thirds of them originated in the Senegambian region, and others were from the Bight of Benin and the Kongo-Angola region. Under Spanish rule, Africans were brought from the previous locations, with the largest number originating from the Kongo-Angola region, as well as from the Bight of Biafra, Sierra Leone, the Windward Coast, the Gold Coast, and Mozambique. Under American rule, the majority of enslaved Africans brought to Louisiana and the largest number that populated New Orleans were of Kongo-Angola heritage. [quoted from knowlouisiana.org] 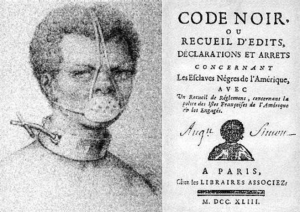 In 1724, France’s Louisiana colony had adopted a less stringent Code Noir [Black Code] than that enforced by the British – e.g. compulsory Christianity and the suppression of any cultural expression, including music – to contain Africans in their American colonies. (Later Spanish rule was also less stern about forced assimilation than in the British colonies, even facilitating opportunities for slaves to buy their own freedom.) Though Sundays were designated as non-workdays for all, an ordinance in the law nevertheless restricted all assemblies of enslaved Africans to purposes of music, dance and merriment only.

Congo Square [“Place des Nègres… Circus Square… Place Congo…”] at the back of town – which incidentally became the center of the French Quarter – was designated in 1817 by NOLA’s mayor as the single location where such assemblies could lawfully take place.

From the earliest days of slavery in Louisiana, Africans had gathered at every opportunity on plantations, along levees, public squares, etc. to keep their cultural connections alive.

Polarizing white laws which restricted the assembly of Africans to confined times, spaces, and purposes might be seen as tantamount to outlawing the mighty Mississippi River – AKA Ol’ Man River – from being the vital transportation artery and communications link it became between peoples and places from its source in northern Minnesota to the Delta in the Gulf of Mexico. African oral traditions – whose Sunday expressions in Congo Square gained in fame and popularity among 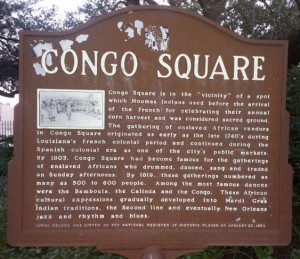 visiting tourists from around the country – were at least on par with America’s main waterway as a dynamic force of nature. The power of this cultural expression was in its ability to magnetize, humanize, transform and build communities in its wake… 24/7.

It’s been said that jazz grew up in a thousand places, but it was born and given all its essentials for life within the African creative nucleus of Congo Square. Carried through the main artery of Ol’ Man River, the seminal heartbeat of jazz flowed through the Mississippi’s tributaries to pursue its aesthetic potentials in places like Memphis, St. Louis, Kentucky, Minnesota, Chicago, Pittsburgh, and New York where – thanks also to the Great Northern Migration – it blossomed in the Jazz Age aka the Harlem Renaissance era of the 1920s.

A who’s-who of great artists such as Buddy Bolden [left], Sidney Bechet, Fats Domino, Jelly Roll Morton, the Marsalis Brothers, and the Neville Brothers came from NOLA. Prince – the Purple One, whose parents were both jazz artists – had immediate roots in this same Louisiana ancestry. ‘When the Saints Go Marching In,’ an apocalyptic spiritual associated with New Orleans, became a jazz-pop favorite through Louis Armstrong’s 1938 arrangement and recording of it…

One of jazz’s defining creative energies is improvisation, a powerful driving force that’s at once about the art of survival as it is about the skills through which a would-be adversary might be disarmed and drawn into conversation, becoming a creative collaborator in the exchange. African oral traditions came with these ancient techniques that brought a certain civility to American discourse, oftentimes by the way musicians improvised on instruments and in tongues that suited the mixed comfort-levels of those in attendance, e.g. merging French songs that came in from Haiti or songs that came from British colonies into African rhythms. Similarly, they’d bring instruments from a range of cultures into conversation with each other 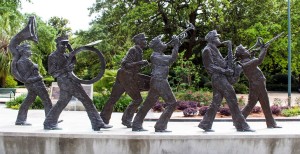 Of the Bamboula [left], Congo, Carabine, Calinda and Juba, the Calinda became the best-documented African dance by White observers. They’d remark on the hot, sweaty gyrations of nearly naked bodies keeping rhythm to the musical accompaniments. Vodun was said to be at the heart of these dances in Congo Square. Marie Laveau, the most powerful voodoo queen and best-known practitioner, led many of these dances. Women held powerful positions in the religion and in NOLA society and, like Laveau who conducted the deeper rituals along the banks of St. John’s Bayou and Lake Pontchartrain, selected which aspects of vodun to practice in the open among strangers.

Congo Square gatherings became quite the gumbo of cultural expression, heightened in the 19th century by the fact that NOLA’s slave marketing had expanded despite the U.S. ending the international trade in 1808. Amidst the expansionist ideological fervor of manifest destiny,

NOLA had become the nation’s largest slave market in the antebellum South via forced migration; illegal shipments of slaves from the Caribbean; the domestic resale of enslaved Africans to the Mississippi valley; and by becoming the largest exporter of slave-picked cotton. Overtly Eurocentric, the central belief of manifest destiny held that white settlers were destined to expand across north America and, by extension, the world – promoting and defending US-style democracy. Later labelled “American Exceptionalism,” its three basic programs were: (i) White people and their institutions have special virtues; (ii) The United States has a mission to redeem and remake the world in its own image; and (iii) Accomplishing this goal is America’s duty to god – hence its Manifest Destiny. 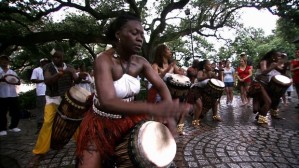 Congo Square thus becomes an ideological crossroads… a spiritual intersection dominated by a culture that reflected the population of enslaved Africans brought to Louisiana. Their ability to transform and manifest inclusive, conversational, and democratic arrangements around oral-aesthetic forms – JAZZ, among others – contributed immeasurably as a civilizing influence to America itself. No unwelcome impositions, false/inauthentic programs, policing, or Angola State Penitentiary’s required…

With UbuNtu (“I am, because we are…”) as her countervailing cultural mandate and modus-operandi, against the greatest odds Africa’s humanizing destiny became manifest here through the Congo Square community of saints. From her natal roots to this American wilderness and beyond, the circle of UbuNtu remains unbroken. ❤