“We came from the beginning of the Nile where God Hapi dwells, at the foothills of The Mountains of the Moon” ~ is, according to scholars, a declaration in The Papyrus of Hunefer, which was a copy of the ancient Book of the Dead. Hunefer, owner of this papyrus, was “Scribe of Divine Offerings,” “Overseer of Royal Cattle,”

“We…” refers to ancient Egyptians in the Delta region [papyrus symbol]

“…beginning of the Nile…” refers to the River Nile’s Great Lake estuary cradled in its East-Central African source [lotus symbol]. Nile comes from ‘Neilos’ – a Greek corruption of ‘nwy’ meaning ‘water’ in Khemet,

though locals referred to it as ‘iterw’ meaning ‘the river.’

“…Mountains of the Moon” refers to the Rwenzori Mountains which border present-day Uganda and DR Congo. Some of the Nile waters flow from the peaks of these mountains.

Hapi [Hep/Hap/Hapy] – was a pre-dynastic name for the Nile deity of fertility who was also known as ‘Lord of the Fishes and Birds of the Marshes’ – provisions along with the annual inundation [known as the ‘Arrival of Hapi’] which have always sustained Nile Valley civilizations. So Hapi was often revered by citizens above other gods with chants, prayers, and sacrifices. Even Akhenaten [the so-called ‘heretic king’] could not banish Hapi as he had other gods during his reign. Instead, he tried to suggest that Hapi was an incarnation of Aten – the controversial solar disk god whom Akh’en’aten promoted himself as being the likeness of: 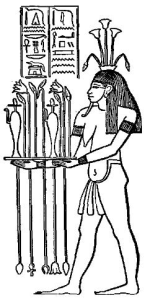 “I propitiate him who lives by truth,
The Lord of Diadems, Akhenaten,
Great in his lifetime.
O Hapi, by whose command
One is powerful
The food and nourishment of Egypt,
The vital ruler who forms me,
Makes me, fosters me…”

Hapi‘s blue or green skin denotes his status as a deity of fertility. God of both Upper and Lower Khemet, Hapi‘s portrayals included the lotus [symbolizing the life-giving/resurrecting source of the Nile’s Upper region] as well as the papyrus [which symbolized the Lower Nile Delta region where the river’s journey climaxed]. Depictions of twins ‘Hapi-Reset‘ [Upper Nile/lotus] and ‘Hapi-Meht‘ [Lower Nile/papyrus] tying together of these two plant symbols reflect the uniting of the “Two Lands.” 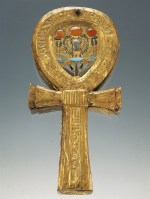 Similarly, Hapi’s depiction as a hermaphrodite who was endowed with both feminine and masculine features [breasts and a penis], symbolized this same unity in human form, while the false beard of the pharaoh denotes Hapi‘s authority as Nile Valley god/dess. As a “key of life” principle, the co-creative unity and balance that must exist between divine feminine and masculine is a consistent and sacred African ideal, commonly portrayed as a ‘feminine’ oval surmounting a ‘masculine’ crucifix in the ancient ankh symbol.

To tarot deck readers, Hapi might be compared to the World card [#21 or XXI] – the final Major Arcana card which in some decks is depicted by an androgynous figure suspended between heaven/above and earth/below. The World card represents cosmic consciousness – the completion of a significant S/Hero’s journey cycle and a pause in life before the next big cycle begins once again with the Fool [usually the #0/“zero” card of the Major Arcana]. As such, the World amounts to our perfect union with the One uniting force of the universe [Ntu, in the Bantu world-view] which, seeded within the divine feminine womb, contains all the potentials for the next phase of our ascension journey.

The adinkra symbol of conjoined halves of a heart represents Sankofa – an African term that reminds us: “In order to move forward, you must reach back to reclaim that which may have been lost, forgotten, or stolen.” The process of truth-seeking in our respective journeys as divine feminine and masculine which provides the elixir that leads to our collective re-pair and ascension – is one of traversing the arcanum from “the fool” to “the world.” The elixir that is discovered in this process is ideally what ushers in humanity’s next-level, soul-restoring unity-consciousness which is referred to in Africa as Ubuntu, meaning “I am, because we are.”

The testimonial of the Papyrus of Hunefer thus presents a dilemma by drawing attention to the waters at the “…beginning of the Nile where God Hapi dwells” – a spiritual resource which was stolen through the violence of colonial assaults, nonsensical geographic constructs, and subsequently-falsified texts [biblical… historical… philosophical… geographical…]. In Kiswahili, these waters at the source of the Nile are referred to as ‘Maziwa Mkuu,’ meaning ‘great milk’ – a tacit African recognition of the Milky Way flowing as the nurturing heavenly river on earth which blossomed in ancient times as Khemet. “Victoria” – the river’s yet-to-be-reclaimed source – has, by her blatant presence, poisoned sacred waters, created a false matrix, and maintained a state of arrested development [the Fool] over a consequently colonized human consciousness [the World]… even as we stand today at the cusp of the emancipatory Age of Aquaria [card of the Star/Water Bearer].

Nut – Goddess of the Sky whose arms and legs create the four pillars between heaven and earth – is the primordial water-bearer, as depicted in her crown. (She is often synthesized with goddess Hathor – prototype of the Madonna-Child as Divine Womb and Celestial Nurse [milk-provider].) As I’ve posted previously, the water-bearer is epitomized by the African woman whose water vessel symbolizes humanity’s womb and portal into life. Culturally she is regarded as maternal in her element as the ocean, seas, and lakes – such as the veneration given to the Yoruba orisha [deity] Yemaya. 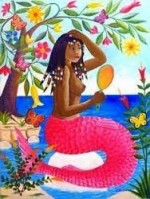 On the other hand, as the river orisha Oshun, she is associated with sensuality, playfulness, fertility, love and beauty. Both are aspects of the same goddess archetype which, according to followers throughout the African world, unite in the figure of Mami Wata – a figure who is commonly depicted as a mermaid holding a mirror and/or a fan. All three orishas prefer the color gold, interchangeably with yellow.

For me, the confluence in Hapi’s S/Hero’s Journey through this Nile Valley Mystery becomes a ground-breaking revelation when the right pieces are understood within a non-linear [read: “non-Eurocentric”] playing field. The proposition: “We came from the beginning of the Nile where God Hapi dwells, at the foothills of The Mountains of the Moon” [from the Papyrus of Hunefer] signals the divinely-sanctioned return and reunion of the African God/dess. 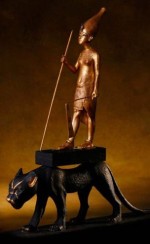 The unbreakable bonds of their sacred union [“Upper/Lower… North/South… above/below… within/without…”] are represented through Hapi‘s imagery and symbology, including the significance of the papyrus and the lotus respectively, as well as within their sacred tethering. This revelation-through-symbol to me also connects with Tut’ankh’amun [pictured right. See posts here & here]. Corresponding biblical references abound, e.g.: “The queen of the south shall rise… behold, a greater than Solomon is here” [Matthew 12: 42]; “Make haste my beloved…” [SoS 8: 14]; “Behold, I come quickly: hold that fast which thou hast, that no man take thy crown” [Rev 3: 11]…

In Khemet, crowns represent an evolution of consciousness resulting from the respective journeys of the divine feminine in concert with her divine masculine who, as Tut’ankh’amun, travels through the after-world on his necessary mission. Their successful outcome and bond becomes the nucleus of a collective/communal levelling-up… Hotep ❤ M