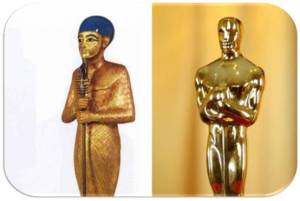 SYNOPSIS [Movie?]: “The survival of humanity hangs in the balance when SET kills and mutilates the body of his brother AUSAR in his evil bid to usurp the throne of Kemet, in Africa’s Nile Valley Ma’atrix. The universe is plunged into chaos and conflict as Set scatters the dismembered parts of Ausar throughout the African Diaspora, forcing his brother’s lamenting widow, AUSET, to search and piece her husband’s body back together. Hoping to save the world and be re-paired with his true love, MA’AT, a scribe to the Gods of Kemet named DJEHUTI forms an alliance with HERU, the avenging son he’d helped Ausar and Auset posthumously conceive. Their battle against Set and his henchmen takes them across the wilderness – an apocalyptic testament of Set’s tumultuous rule; into the afterlife – where Ausar now governs; and finally up to the threshold of the Heavens – where Djehuti’s magical arts and powers of decryption become key to the reparations humanity needs.” 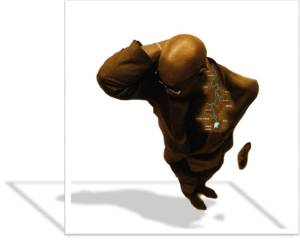 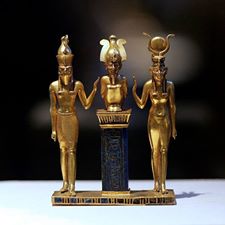 AUSAR~AUSET~HERU ~ Eldest of four offspring from the sky god (Geb) and the earth goddess (Nut), AUSAR (Greek “Osiris”) became wise lord and king of Kemet where he ruled successfully with AUSET (Greek “Isis”) as his wife. The respect Ausar was able to command both on earth and in the nether-world as the bringer of civilization made his younger brother, Set (Greek “Seth”) so jealous that he murdered and cut the king into 14 pieces which he scattered throughout the wilderness to prevent Ausar’s resurrection. Set then ascended the throne, leaving Auset to roam the land in search of each of her husband’s pieces which – minus his still-missing penis – she reassembled and mummified. However, through the summoning of magical powers, a resurrected Ausar was able to posthumously impregnate Auset with the seed of their son, HERU (Greek “Horus”) who went on to avenge his father’s murder and challenge Set for the throne. Although Ausar went on to become Lord of the afterlife, the Trinity of AUSAR~AUSET~HERU and their associated miracles were the immediate precursor to the Graeco-Roman versions of the Bible. 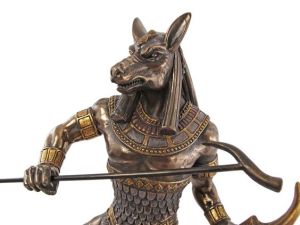 SET VERSUS HERU ~ Younger son of Nut and Geb and younger brother of Ausar in the Ennead of Heliopolis, SET was considered a very strong and potentially powerful friend, but was also an unpredictable, dangerous and strange god. After all, he is reputed to have murdered and mutilated his older brother in order to ascend to the throne as king of Kemet. But Set also became marked for his warped sexual habits, particularly as a bisexual and a pedophile whose failed attempt to rape his underage nephew, Heru, became central to his legacy. According to Osirian mythology, Set had several wives and concubines, including Nepthys whose unhappiness in the relationship with her husband included the way he’d attained his kingship. Nevertheless, despite being later married to the goddess of childbirth (Taweret) as well as Canaanite fertility goddess Astarte, Set remained childless – an unconventional situation by the standards of Kemet. However, it is thought that Set’s infertility was exacerbated by the fact that one of his testicles had been torn off by Heru (Horus) during a key episode in their ongoing battle in which Set, for his part, tore out one of his nephew’s eyes. 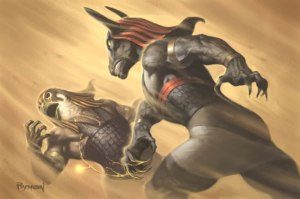 Another key episode of their conflict, according to the Chester-Beatty Papyrus I, is when Set tried to seduce and have intercourse with his nephew, in part to prove his dominance by thus degrading Heru. But Heru, whose hands had been between his thighs during the act, caught Set’s semen and threw it into the river so it could not be said that he’d been inseminated. When they went before the gods of the Ennead to settle the argument over kingship, Heru ensured that his uncle had eaten a serving of lettuce (Set’s favorite food) on which Heru’s own semen had been spread. The gods first called forth Set’s semen, but when it answered from the river, Set’s claim of having subjugated Heru was invalidated. When the gods then called Heru’s semen forth, it answered from inside Set, thus proving Heru’s dominance. However, Set refused to step down as king until after their boat race challenge which Heru won when Set’s stone-built boat sank against his wooden one that had been painted to resemble stone.

Numerous sources – including the Pyramid Texts; the Coffin Texts; the Shabaka Stone; various papyruses; and wall inscriptions in the temple of Horus at Edfu – chronicle the conflict between these natural enemies and their decades-old battle over who was Ausar’s rightful successor and therefore ruler of Kemet. A historical account of the peace treaty worked out by Geb (leader of the Ennead), the Shabaka Stone says that the Lower (delta north region) was given to Heru, and the Upper (desert south region) was given to Set. Over subsequent millennia Set became associated with the Hyksos – hostile foreign invaders from the desert who enslaved the native men along with their wives and children. Thought to have the white skin and red hair attributed to his followers, Set’s links to Africa’s parched, infertile desert (the red place) expanded to represent all deserts and foreign lands. His glyph appears in the words for “turmoil… confusion… illness… storm… and rage” which eventually cemented Set’s negative brand as god of the desert, storms, disorder, violence and foreign oppressors. 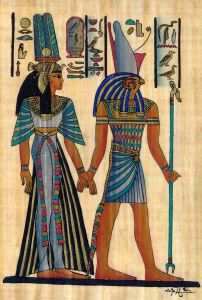 As analogy, the myth came to symbolize the struggle between the Nile black-lands (ruled by Ausar/Heru – “protagonists”) and their fertilizing floods, versus the wilderness/desert red-lands (ruled by Set – “antagonist”). Though the two lands eventually united and Set and Heru began presiding over the crowning of new pharaohs, the representative depiction that remains most popular is that of Heru wearing the unification crown of North/Lower and South/Upper Kemet. Queens of the First Dynasty bore the title “She Who Sees Heru and Set,” in keeping with how pharaohs represented a reconciliation of the cosmic principles separately embodied in each of the two competing (lower- vs. higher-nature) male deities [NOTE: read further discussion here].

As one of the many Proverbs from the Luxor Temple of Amun~Mut~ Montu/Khonsu: the Triad of Waset (Greek “…Thebes”) states: “A phenomenon always arises from the interaction of complementarity. If you want something, look for the complement that will elicit it. Set causes Heru. Heru redeems Set.” 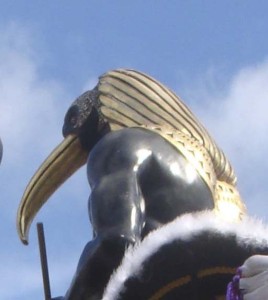 DJEHUTI & MA’AT ~ The mythology and Trinity of Ausar~ Auset~Heru, Kemetic forbearer of the Graeco-Roman Christian script (according to many scholars), was greatly impacted by the role of its often unsung hero, DJEHUTI  (Greek “Thoth” &/or “Hermes Trismegistus”). It was Djehuti’s ritual which enabled Auset to bring Ausar back from the dead (“resurrection“), making possible the “virgin birth” of Heru, the son of the “Holy Trinity.” Time and again Heru continued to benefit from Djehuti’s wisdom and magic in his subsequent years – notably during Heru’s sometimes deadly battles against his uncle, at one time having Set’s poison driven out from him by Djehuti. 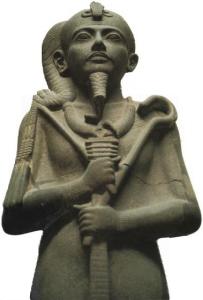 Also fascinating is Djehuti’s mentoring of the son in the African Trinity of Amun~Mut~ Montu/Khonsu: the Triad of Waset (Greek “…Thebes”). One of the best-known stories of Montu (AKA Khonsu) says the son of Mut and Amun wagered a portion of his light against Djehuti in the ancient game of senet/“passage,” and because he lost Montu/Khonsu waxes and wanes like the moon – unable to show his whole glory for the entire month. The regularity of the moon has always been the basis for the Kemetic Lunar calendar, each month consisting of 28 days. As described in Pyramid Text 273: The moon god Khonsu, pendulum of heaven, precise divider of months, Khonsu, most mathematical aspect of Thoth [i.e. Djehuti].

Regarded as god of the magical arts, the powers of Djehuti were many and so well renowned (rivaling Ausar’s) that without his words (oratory) it was believed the gods themselves would not exist. He himself was self-begotten and self-produced. Every work of every branch of knowledge, human and divine – including spirituality; magic; philosophy; arts; literature; speech; astronomy; mathematics; geometry; medicine and other sciences – was credited to Djehuti. It was he who was said to have made the calculations for the establishment of the heavens, stars, earth, and time (inventor of the annual calendar) – directing the motions and seasons of everything therein – while MA’AT  (Djehuti’s consort) was said to be the divine feminine force which maintained the universe. Both complementary deities stood on either side of the boat of sun-god Ra. Also credited with the invention of alphabets/hieroglyphs and writing, Djehuti served as the chief scribe of the gods. In his role as master of divine/ moral law, Djehuti was a mediating power between good and evil… in the afterlife reporting the weight of the deceased’s heart against the feather of Ma’at.

MA’AT – the divine feminine Kemetic ideal and representation of truth, balance, harmony, divine order, morality, justice and reparations – was Djehuti’s consort. As the goddess who regulated the stars, seasons, and actions of both mortals and deities, Ma’at served to prevent the world from returning to chaos. Her decree that Heru was the rightful ruler of Kemet for instance, is said to have earned compensation for Set (god of chaos…) in the persons of two wives of foreign origin (from the Syria-Palestine area), Anat and Astarte. As the popularly recognized norm for nature and society in this world and the next, Ma’at’s other primary role was in the underworld (Duat) – weighing the souls of the departed against the measure of her feather. 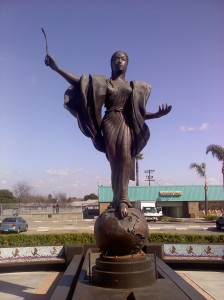 The number “42” applies not only to these “Negative Confessions” that showed one’s having lived their life in accordance with Ma’at, but also to the 42 Books of Instructions credited to Djehuti – he who understood ‘all that is hidden under the heavenly vault.’ Djehuti recorded what he knew and then – maintaining the silence and secrecy of Ausar – hid this knowledge away, intending that younger truth-seeking agents would one day find and decode it in a later cosmic time… a time when the chaotic shadow-system would fall away, and Ma’at would be restored to her rightful and divine standing in the universe. 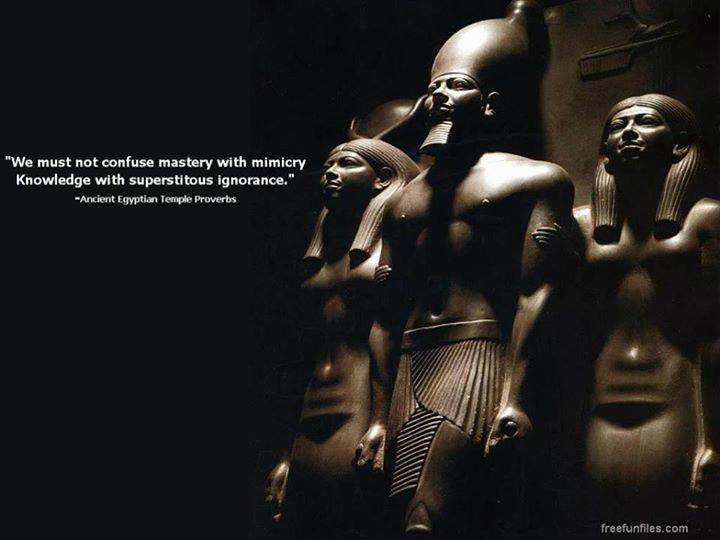