Ausar, god of the afterlife whom many believe holds the seven heavenly stars in his glorified form in the Hunter constellation, was said to have had a great passion for song and dance during his popular reign in Kemet. So much so that he recruited several African Muses to accompany him on a tour to teach the legendary Nile Valley arts of cultivation throughout Asia and Europe, and always had a troupe of musicians back at his court. These Muses became Goddesses in Kemet, but the later Greek conquest of Ausar’s kingdom led to their colonial conversion and subjugation under Apollo Musagete – “Apollo, Leader of the Muses” – of the Olympian world.

Touted in subsequent Greco-Roman histories as God of music, poetry, art, oracles, archery, plague, medicine, sun, knowledge and light, Apollo is said to be the most important and complex deity at the foundation of classical Eurocentric thought.

The post-mortem on Ausar’s popular reign in Kemet is that he was murdered by his younger “brother” – named Seth in Greek – whose extreme jealousy led to him mutilating Ausar’s body into 14 separate pieces which he buried throughout the wilderness (understood by some to be metaphorical of the African Diaspora). Seth then ascended the throne of Kemet as ruler, leaving Auset – Ausar’s bereaved widow who’d been his greatest Muse – to search the land in order to find and reassemble her murdered husband’s body parts. Auset gathered only 13 pieces which she mummified and, through the summoning of magical powers, was able to resurrect Ausar and become posthumously impregnated by him despite his still missing penis (the 14th piece, depicted architecturally in the African obelisk). 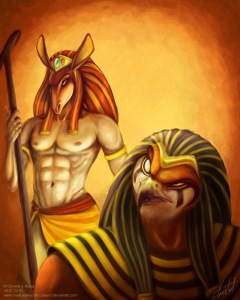 From Ausar’s seed Auset bore their son – Heru – who in his later avenging years outwitted his “uncle” Seth’s attempt to seduce, sodomize and thus degrade him before the gods. After several battles Heru was eventually successful in putting an end to Seth’s reign and being declared the rightful heir to the throne of his father Ausar. From a psychological perspective which holds that Seth represents the ‘chaos’ of man’s lower nature, this is interpreted by some as a prophecy about the conquest of evil and anticipated return of the enlightened One in his higher, fully-integrated god-nature. Heru would therefore represent the ‘warrior’ aspect of the Divine Masculine which also includes the ‘king’, the ‘magician’ and the ‘lover’. Seth’s negative brand on the other hand was cemented over time as god of the desert, storms, chaos, disorder, violence and foreign oppressors.

There’s some dispute as to whether the original Muses were 3 in number or 9 as in the Greek mythological adaptations of their Kemetic precursors who were the inspiration for the arts, literature, and sciences. From “music” to “museums” (spaces set apart for the preservation and dissemination of works which the Muses have inspired over the course of human history) words and their symbols – called “spell-ing” – have been equated to ‘magic’ in their alchemical effect. The communication chain or order of knowledge which followed such word-spells was thus qualitatively different in Ausar’s Kemet than in the Greco-Roman world which appropriated African wisdom through conquest (Alexander in 332 BCE, followed by Caesar in 30 BCE).

This was the period during which Greek biblical writings of the Old Testament came about; 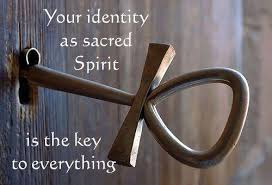 when a different alchemy issued forth from the writings/“scriptures” of the scribes of Euro-patriarchal leaders who were conquerors and colonizers – not only of land, but of human consciousness – to this present day.

Alchemy, as it developed in Kemet under its originating God Djehuti (inventor of writing), was both a philosophy and a science. Tied to the Nile River – a basin of fertility referred to as Khem (hence Khemet) – ‘alkhemy’ originally sought the secrets of nature and their connectedness to the heavens and, as a rational alternative to “magic,” attempted to reveal these secrets through laboratory experimentation and examination. 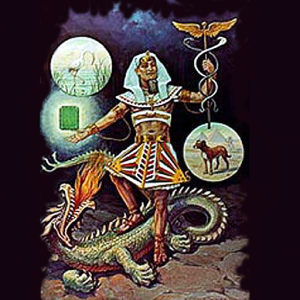 Chemistry [khem-mystery] and other modern lab techniques were born in alchemy – the disciplined pursuit of the ultimate Muse or elixir of life. The practice of alchemy (e.g. the life-after-death rituals of mummification performed on Ausar) was firmly in place under African auspices and recorded as the subject of one of Djehuti’s renowned forty-two books of knowledge. During the Greek-invasion era and its cultural appropriations, Djehuti became Hermes-Trismegistus [Hermes ‘thrice-greatest’] whose serpent-staff symbol of alchemy, the ‘caduceus,’ became that which we currently recognize as representing medicine.

Alternatively, when depicted with a single snake ascending the staff, the caduceus was referred to as the Rod/Staff of Asclepius, the designated Greco-Roman “god of medicine” who was the mentee or “son of Apollo.” Subsequent to Greek colonial rule over “Egypt” – Kemet’s colonial name – the Roman-Christian invasion under Julius Caesar caused much of the information on alchemy and other valuable records to be lost in the burning of the library at Alexandria.

Ages before the Library of Alexandria was built, there existed the Per-ankh – ‘House of Life’ – an institution of learning located in the major temples of sizable African towns such as Abydos, Akhetaten, Akmim, Edfu, Esna, Koptos, and Memphis. Run by priests who were considered servants of the creator god Re, Houses of Life were ancient centers for the preservation and dissemination of knowledge – much of it for authorized initiates only – dating back at least as far as the Old Kingdom reign of Pepi II (2246-2152 BCE). The Per-ankh was where different subjects such as medicine, magic, theology, astronomy, ritual, and dream interpretation were taught; where liturgical texts, sacred books referred to as Souls of Re, and the writings of the foremost scribe Djehuti were housed for people to consult; and where problems of the day for sages such as 3rd Dynasty Imhotep could be answered. It was here where scribes learned and perfected their craft (often by copying old texts such as the Book of the Dead), and developed their expertise in religious and magical matters. The work of scribes was in service to the Gods and/or the Muses. Ausar’s annual rebirth ritual is said to have been contained in secret, magical writings preserved at the Per-ankh. Auset, Amun-Re, Heru, and Sekhmet were among the revered deities of the Per-ankh. However it was Goddess Seshat – Mistress of the House of Books – and God Khnum who bore the epithet Foremost of the House of Life. 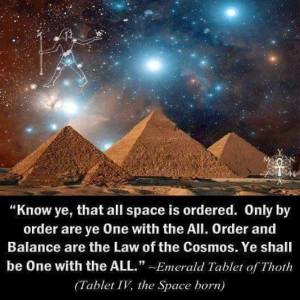 Scholars contend that Djehuti’s canon of writings were preserved and strategically hidden inside two Per-ankh pillars, one made of pure gold and the other of emerald. These pillars contained priceless manuscripts as well as the Emerald Tablet which summarized Djehuti’s writings and outlined an Africa-centered philosophy of the Universe. Although priests of Amun kept Djehuti’s works hidden, phrases from his philosophy can be found in the Papyrus of Ani (1250 BCE), the Book of the Dead (1500 BCE), and other religious scrolls dating up through 300 BCE – 32 years after the Greek conquest. Hermetic scholars believe that the Library of Alexandria was built primarily to relocate, house and study these particular materials, one of which records Djehuti’s foretelling of the fall of Kemet to outsiders. It was at this library that the oldest Greek translation of the Old Testament was written under the guidance of Ptolemy 2nd. The Library of Alexandria was burned in 48 BCE during the era of Julius Caesar’s Roman-Christian invasions which resulted in the turning over of Egypt from Greek to Roman rule in 30 BCE.

In Stolen Legacy, George G.M. James says the following: The term Greek philosophy is a misnomer, for there is no such philosophy in existence. The ancient Egyptians had developed a very complex religious system, called the Mysteries, which was also the first system of salvation. As such, it regarded the human body as a prison house of the soul, which could be liberated from its bodily impediments through the disciplines of the Arts and Sciences, and advanced from the level of a mortal to that of a God. This was the notion of the summum bonum or greatest good, to which all men must aspire, and it also became the basis of all ethical concepts. The Egyptian Mystery System was also a Secret Order… After nearly five thousand years of prohibition against the Greeks, they were permitted to enter Egypt for the purpose of their education. First through the Persian invasion and secondly through the invasion of Alexander…From the sixth century B.C. therefore to the death of Aristotle (322 B.C.) the Greeks made the best of their chance to learn all they could about Egyptian culture; most students received instructions directly from the Egyptian Priests, but after the invasion by Alexander… the Royal temples and libraries were plundered and pillaged, and Aristotle’s school converted the library at Alexandria into a research centre. There is no wonder then, that the production of the unusually large number of books ascribed to Aristotle has proved a physical impossibility, for any single man within a life time.

Aristotle and Plato were among the greatest Greco-Roman philosophers and thinkers who taught that the purity of their so-called “master-race” should be maintained at all costs, while simultaneously arguing that all other humans were “barbarians” whose enslavement was therefore fitting. In their largely homosocial universe, Greco-Roman goddesses and gods – colonized distortions of African predecessors – existed and maintained for the Olympian world a certain veneer. However under Apollo [the] Musagete’s watch, Greco-Roman muses in this Euro-patriarchal social order were often more likely to be young boys and other men, and homosexual love their summum bonum. As Plato reasons in his Symposium: “homosexual love…alone is capable of satisfying a man’s highest and noblest aspirations, and the love of man and woman, when it is mentioned at all, is spoken of as altogether inferior, a purely physical impulse whose sole object is the procreation of children…” Pederasty, the erotic relationship between male adults (the erastes) and male children (the eromenos), was socially acknowledged and often couched as educative – between an adult mentor and his mentee. Within such ritualized adult male relationships, particularly in Roman culture, the penetrator was regarded as the “master” while the penetrated was regarded as the “slave.” American cosmologist, astronomer and author Carl Sagan notes that in this same Greco-Roman-Christian world, “The permanence of the stars was questioned. The permanence of slavery was not.” 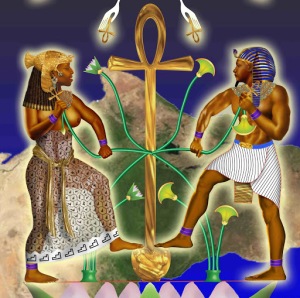 With regard to the summum bonum of the pre-existing and contrasting African ideology and order of knowledge, the Goddess/Queen-Muse and her God/King-Muse each represent complementary co-creational forces that explain and necessitate each other and – from their higher collective vibration – inform the structure and harmonious workings of a self-conscious, life-sustaining and humanity-evolving universal order. Hence the Heaven~Earth / Hunter~Gatherer relationships originally and proactively modeled in the God/dess consortia of [King] Ausar~Auset… [Warrior] Heru~Hathor… [Magician] Djehuti~Ma’at… & [Lover] Amun~Mut. Among other examples of masculine~feminine divinity and the balance of life’s forces, these pre-existing archetypes of philosophical standards differ from the culture which followed in the wake of Greco-Roman colonization and slavery. One example scholars have pointed to is Ausar~Auset~Heru, standard-bearer of the “Holy Trinity” model and immediate precursor to the more homosocial Father~Son~Holy Spirit adaptation which, through such Greco-Roman-Christian “spell-ing” [philosophical and biblical text], diminished if not erased the divine feminine.

As the proverbial wisdom inscribed in the walls of the Luxor Temple of God Amun and his Goddess/Muse/Consort Mut states: 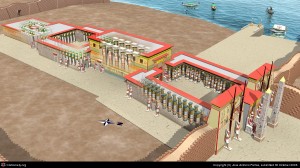 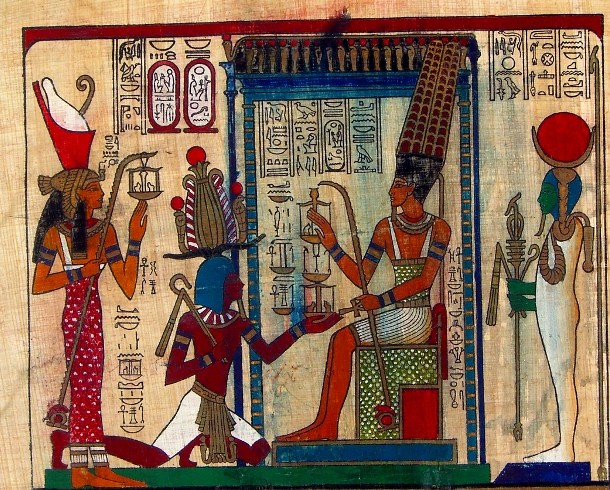