“…She has touched the farthest star
Her beauty speaks of what we are
And her freedom makes us free
Her now is in eternity, infinite to all that see
And her dreams have been achieved
Now there is a sound of laughter
Nature sings out her name
For the world to know her fame… ~ Black Orchid ~” [Stevie Wonder – from ‘Journey Through the Secret Life of Plants’]

During the months of July and August, 2018 Mother Earth is responding to an amazing shift in the Harmonics of the Spheres. The Sun’s gravitational pull has aligned to one side of itself all of the planets in the solar system, each with their own unique frequencies. It’s a time of reflection, purging, and renewal of Earth’s energies along with the consciousness of Her human travelers, who are said to be ascending from Piscean matrix-programming into the Aquarian-Age of emancipation. As we witness Her purging through volcanic eruptions, flooding, earthquakes, etc. in several diverse places, I find myself listening differently to how this Heliocentric moment and movement is conducted in the Cosmic Symphony.

“In His right hand, He held seven stars… His face was like the Sun shining in all its brilliance” [Revelation 1:16]. The ‘seven stars’ in this biblical passage likely refer to the constellation of Orion within whose spiral Arm our solar system lies in the Milky Way galaxy. Located on the Celestial Equator and conspicuous in the night skies from throughout planet Earth, the constellation is recognizable by its 4 outer stars wherein lie the 3 stars known as Orion’s Belt which create its distinctive hourglass shape.

“As Above, So Below” ~ With these words, Djehuti/Thoth [Gr. Hermes Trismegistus: ‘Hermes the thrice-greatest’] links the well-being of Mother Earth to that of the Cosmos/Heavens, suggesting that Her Divinity in the world ‘below’ is a barometer of His Majesty in the world ‘above.’ His speech to Asclepius affirms this relationship as God’s design of Heaven-on-Earth, a blueprint that was key to Khemet’s ancient Mysteries.

“And if you wish to see the reality of this mystery, then you should see the wonderful representation of the intercourse that takes place between the male and the female… Art thou not aware that Egypt [Khemet] is the image of heaven, or rather, that it is the projection below of the order of things above?” These words cause a geographical hard-shift as my mind then asks whether the Equator ‘above’ – on which the Hunter constellation, ‘Orion’ lies – is oriented to the Equator ‘below,’ which happens to run through Mother Earth’s womb in East-Central Africa?

Archaeology informs us that millions of years ago, here – at the sacred source of the Nile River [the Milky Way ‘below’] – is where Humanity began. Khemet’s very flowering and spiritual/intellectual-consciousness emerged from the annual flooding of this sacred River, whose Great Lakes Source is referred to in Swahili as ‘Maziwa Mkuu,’ meaning ‘Great Milk.’

“To thee I cry, O most sacred River…! Khemet, once the holy land beloved of the Gods and full of devotion for their worship, will become the instrument of perversion, the school of impiety… Then there will remain only evil demons who will mingle themselves with the miserable human race, their hand will be upon it impelling all kinds of wicked enterprise; to war, to rapine, to falsehood, to everything contrary to the nature of the soul. The earth will no longer be in equilibrium, the sea will no longer be navigable, in the heavens the regular course of the stars will be troubled…”

Many would cast Djehuti’s words in the same bag as other End-Times prophesies [Mayan, Christian, Aquarian Age, etc.] which refer to the end of false/linear constructs of time. Others may add to this a particular reading of the AUSAR~AUSET [Gr. ‘Osiris~Isis’] Mysteries concerning slavery,

colonization and the degradation of humanity under the hands of outsiders with contrary souls [represented in Khemetic Mysteries by Set].

“As Within, So Without” ~ Following Persian invasions, from the 6th century BCE Greeks were granted access to Khemet for educational purposes after nearly 5,000 years of prohibition. As was customary, all students would attend ‘Houses of Life’ called Per Ankh – ancient Khemetic centers for the preservation and dissemination of knowledge which were located in the temples and run by priests who were considered servants of the Creator/SUN-God, RE. Khemetic knowledge was always organic and sacred with respect to the natural balance between Divine Masculine and Feminine, and knowledge of Self was paramount to one’s seeking/finding Heaven. “The best and shortest road towards knowledge of truth is Nature… The kingdom of Heaven is already within you; if you understand yourself you will find it… Never look for yourself in the world, for this would be to project your illusion…” [Luxor Temple proverbs].

Projecting the “illusion” of Euro-patriarchal supremacy, however, began to go hand-in-hand with Greco-Roman expansionism aided by a syncretized ‘authoritative’ Christian dogma and soon, as Carl Sagan notes, “The permanence of the stars was questioned. The permanence of slavery was not.”

In Khemetic mythology, SET was the pedophilic god of the wilderness, chaos, disorder, violence, and foreign oppressors. So the Heavens themselves became colonized in Set’s illusory projections and then, despite pre-existing evidence that’s still in place today, this false programming was systematically disseminated under his oppressive ‘conqueror-as-superior’ dis-order/delusion. 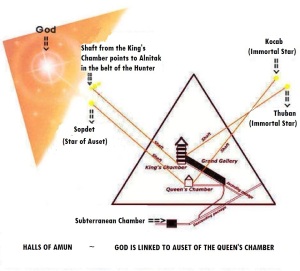 ‘Orion’ and ‘Sirius’ replaced AUSAR/SAH [the Hunter] and SOPDET, his Gatherer-consort/star of AUSET whose heliacal rising brought the annual flooding upon which all Nile Valley civilizations depended and around which original Khemetic belief-systems arose. The decision to design and construct the Pyramids of Giza on African soil and in perfect alignment with AUSAR’s-/‘Orion’s Belt’ must originally have been done to orient human consciousness to its highest vibrational harmonic signature. Aligning the shafts from the Chambers of the King [AUSAR] and Queen [AUSET] in the Great Pyramid to their corresponding celestial stars was done in keeping with MA’AT – Khemetic goddess/concept of truth, divine order, balance, justice, and reparations.

“Know Thy Self” ~ At least as far back as 1400 BCE, Khemetic proverbs from the Luxor Temple fore-warned: “The key to all problems is the problem of consciousness… Men need images. Lacking them they invent idols. Better then to found the images on realities that lead the true seeker to the source… If the master teaches what is error, the disciple’s submission is slavery. If he teaches truth, this submission is ennoblement…” The ‘matrix’ and its parasitic and karmic ‘slave-master’ relationship with Africa was seeded early on [c. Greco-Roman times]. The deceptive plot thickened significantly when ‘Victoria’s shady propofol-dispensing teat was later imposed at the sacred Source [‘Maziwa Mkuu‘] of the Nile River [Milky Way] as European powers in 1884 carved up and took ‘ownership’ of Africa. Trans-Atlantic slavery; [neo-]colonialism; the industrial-pipeline we’re programmed to serve; crass consumerism; and institutional racism are but a few karmic energies of this matrix-system’s misleading paradigm. The New Age emancipation movement against this 3D monument to SET‘s elite cabal seeks to manifest a higher-frequency humanity-oriented 5D ‘Heaven-on-Earth’ which I recognize as UbuNtu. Called the ‘Age of Aquarius’ [based on where the sun now rises in the zodiac], this New Age reset matches up to the end of a prophesied 400-year period of bondage for God’s chosen in “a strange land” – served since 1619 in America by enslaved Africans.

For many, this New Age is seeded by a reunification of Twin Flames – Divine Masculine and Feminine souls who are destined to reunite, having awakened from their separate human experiences and life lessons which often include significant  Catalyst & Karmic relationships with other individuals and/or members of soul groups.

From an Afrofuturist perspective, this ‘New Age’ would also represent Reparations – a return to the original GOD/DESS model and much more. Beloved as co-creational African divinities who explain and necessitate each other, the mythology surrounding AUSAR [Hunter] & AUSET [Gatherer] presents them as the original Divine Twins whose paired mission is to triumph over the adversities of SET the invader’s inorganic ‘matrix’ of containment, slavery, colonialism, exploitation, etc. King AUSAR‘s murder, mutilation and the scattering of his 14 pieces by SET in the latter’s bloody coup to capture Khemet’s throne and Majesty is the Catalyst for AUSET as Gatherer. She searches SET‘s wilderness/African diaspora/3D matrix, recovers and mummifies 13 pieces of AUSAR’s remains and then uses magic to resurrect his missing 14th piece. AUSAR and AUSET posthumously conceive a son, HERU, who fights SET for the throne so as to restore Khemet from Karmic descent to its original Divine Order and highest ‘Heaven-on-Earth’ frequency. Themes of ‘sacrifice,’ ‘resurrection,’ ‘virgin birth,’ ‘salvation’ and ‘reparations’ characterize and qualify AUSAR, AUSET & HERU as the quintessential HOLY TRINITY in every sense of the term. SET‘s love of ‘power’ can only successfully operate at a dense 3D frequency of mass manipulation and oppressive control.

AUSAR~AUSET’s UbuNtu-consciousness – “I am because we are” – represents the triumph of love over SET. Thus, humanity – as the collective Black Orchid – gathers/owns/honors her truth, ascends in integrity, dances and celebrates to the Cosmic Song of songs…

“…and thereafter He will restore to it its primitive beauty; so that once more it shall appear worthy of admiration and worship, and again a chorus of praise and of blessing shall celebrate Him Who has created and redeemed so beautiful a work. This re-birth of the world, this restoration of all good things, this holy and sacred re-habilitation of Nature will take place when the time shall come which is appointed by the divine and ever-eternal will of God, without beginning and always the same.” [Djehuti]

← UbuNtu ~ On Owning Your Masters
Hymns to Amun →