Per-Ankh were learning centers attached to the temples of ancient Egypt where, under the leadership of god Djehuti, knowledge was considered organic and sacred. The hieroglyph for per-Ankh (an open square over the ankh “key of life” symbol) spells out its meaning as “House of Life.” It was at these houses of life in Kemetic temples where scribes learned to preserve and disseminate knowledge through the sacred craft of hieroglyphics (meaning ’holy writing’) created by Djehuti. Run by Priests or Servants of creator god Amun-Re, the per-Ankh was where Djehuti’s writings were housed and where sacred knowledge (representing his vast understanding of the universe) would initiate seekers into higher levels of consciousness. Djehuti characterized their ancient African homeland as the Temple of the World, which spoke volumes about the sacredness of the Life, Love, and Light that arose from humanity’s cradle. This erstwhile dwelling place of the gods in the ancient Nile Valley became the original theater within which the archetypes and mythoforms that continue to play out on the human stage were constituted.

Djehuti, who himself is a template of the Magician archetype of divine masculinity was represented in the divine feminine by Goddess Seshat. Among her many attributes, Seshat held the prestigious title of Foremost of the Per-Ankh and was regarded throughout ancient Egypt as Goddess of Wisdom, Writing, Mathematics, Astronomy, Astrology, as well as Goddess of Architects and Builders.

This 13th century BCE relief of Seshat comes from the back of the throne of a seated statue of Ramesses II in Ipet Resyt, the “southern sanctuary” of God Amun-Re and Goddess Mut. Known today as Luxor Temple, the architecture of Ipet Resyt was designed as if to resemble a human figure lying in repose on her back.

Given the Annunciation account on the walls within the ‘throat’ area of this Temple where God Amun tells his beloved that she will bear the sacred child who is humanity’s Savior, it is fair to interpret the raised ‘stomach’ area as an architectural depiction of her womb with child. 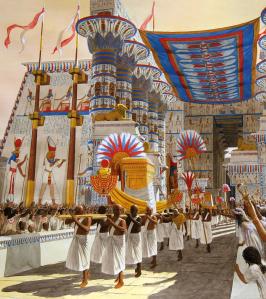 This sacred prophecy was ritualized in the Feast of Opet, a festival celebrating the Nile floodwater’s annual restoration of Egypt’s fertility with a grand procession from Ipet Isut (the “most select place” and northern sanctuary of Amun/Mut – now Karnak). Statues of Amun-Re, Mut, and son Montu were borne in barques from Ipet Isut to Ipet Resyt in this holy fertility rite and days-long public festival.

Similar to this annual Feast of Opet that was staged between the southern and northern sanctuaries of God/dess consorts Amun-Re/Mut was the ‘Beautiful Feast of the Reunion’ (Hab Nefer en Sekhen) between Goddess Hathor and consort Heru. The name Hathor [Hwt-Hr], meaning ‘mansion of Heru,’ became fully illumined through the annual fertility rituals surrounding her conjugal visit and Reunion Feast with Heru. This visit entailed Hathor’s enshrined icon being sailed upstream on the Nile River from Dendera (her Temple) to Edfu, accompanied by a mixed cadre including priests of the goddess, largely numbered by musicians and other creatives.

Much celebration accompanied Hathor’s arrival in Edfu, including offerings of myrrh, aromatics, and systrums (Hathor’s sacred instrument) as well as hymns encouraging her to unite with “He of Dappled Plumage” – Heru. Harvest-related elements included offerings to the divine ancestors; the ritual harpooning of a red hippopotamus representing enemies of the state (aka Set); and the release of four geese (Hathor’s sacred bird) on the second day of the feast to bear the news that Heru had received the Double Crown.

The Double Crown, called pschent or sekhemty (the ‘Two Powerful Ones’) was worn by ancient Egyptian leaders to symbolize the unification between South/Upper and North/Lower kingdoms. The white Hedjet and red Deshret crowns represented South and North respectively. From the Double Crown’s symbolism, one may extrapolate the ‘Two Powerful Ones’ as representing a productive unification between the Divine Feminine and Masculine, as symbolized in the ankh.

Indeed, following the close of the Edfu festivities, Hathor would travel back to Dendera to symbolically give birth to her child with Heru who came to be celebrated as God Ihy, portrayed as a naked systrum player, or alternatively as Heru-Sema-Tawy.

Sema (“Speak/Say!” in Swahili) means ‘to unify,’ & Tawy means ‘the Lands.’ Ancient Egypt’s Early Dynastic Period [c3150-2613 BCE] began with the unification of South/Upper and North/Lower Egypt under Pharaoh Menes aka Narmer in 3100BCE. This unification was further symbolized as a human trachea rising from the lungs entwined with the lotus (South) and papyrus (North). The Double Crown therefore represented a leader’s consciousness of and willingness to uphold the constitutionality of that arrangement during their rule. Narmer‘s was the first of 30 successive dynasties which ruled and maintained civil order through a centralized government from the unified ancient Egyptian capital of Memphis. During this period of time, Ptah was the revered deity.

Ma’at – who represents Divine order, truth, balance, morality, judgement, justice, reciprocity and reparations – is the Goddess of the ancient Constitution that came in with the South-North union. Ma’at’s Principles from the Papyrus of Ani (1250 BCE) represent humanity’s oldest source of moral instruction, predating the Judeo-Christian 10 Commandments and forming the basis by which souls of the departed are weighed against her feather in the Halls of Judgment. In the mythology of Auset, Ausar, and their posthumously-conceived son Heru, it was Ma’at who decreed Heru as the rightful heir to the throne of ancient Egypt after Heru’s several battles to depose Set. 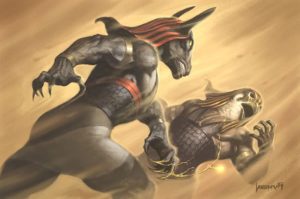 As God of the desert, chaos, disorder, violence & foreign oppressors, Set represents the very forces of darkness Ma’at counteracts in both our personal and societal constitutions. Sema-Tawy represents the social constitution of Djehuti’s Temple of the World – a South-North pact which was thrown into chaos and darkness within the African context via Set’s enterprises of slavery, colonialism, apartheid, etc.

But Set had also been consumed with jealousy over how brilliantly the union of Ausar and Auset became reflected in their popular rule over the heaven-on-earth kingdom of ancient Egypt. The constitution of their uniquely divine relationship was the archetypal model for Sema-Tawy, the South-North pact of the Temple of the World which further triggered the “god of chaos…”

This triggering is echoed in America’s current grappling with existential questions surrounding its own history, South-North dynamics, collective identity, and desire to still be regarded as the world’s beacon of light and democracy. And yet again, Ma’at is caught in the constitutional contendings or crosshairs of “Heru” versus “Set” within this American theater of Africa’s northern hemisphere – a riveting production of “Egypt on the Potomac” to borrow from Dr. Anthony T. Browder. Several thought-provoking proverbs from Ipet Resyt [Amun-Re and Mut’s southern sanctuary] come to mind under the present circumstances, including:

“A phenomenon always arises from the interaction of complementarity. If you want something, look for the complement that will elicit it. Set causes Heru. Heru redeems Set.”

America’s tkhn-replica known as the Washington Monument (built 1848-1884 by enslaved Africans) is barely understood by most as an architectural representation of the 14th piece of Ausar’s mutilated body which Auset was unable to find on her search-and-recovery mission through the “diaspora” created by Set’s bloody coup of heaven-on-earth.

At times acting as a literal lightning rod, this tkhn-replica stands at the crossroads of a geographic crucifix: US Capitol to the east; Lincoln Memorial to the west; Jefferson Memorial to the south; and White House to the north.

What also fascinates me is the symbolism of the National Museum of African American History & Culture, which opened in 2016 and now stands by the side of this tkhn, as if to testify to… what? All roads lead to reconstitution of that which was divinely-ordained?

What light might the per-Ankh shed from its Temple of the World into Africa’s South-North global space-timeline? Perhaps Goddess Seshat is the designated beacon of light as Foremost of the per-Ankh… She of 7 Points… Opener of Heaven’s Door… her attributes echoed in America’s Statue of Liberty. Much to the surprise of many, this colossal iconic symbol which stands in the New York Harbor was built to commemorate the end of American slavery in the northern hemisphere of African space-time.

Clearly much got lost in the Euro-patriarchal translation of Lady Liberty’s signification and presentation which brings into question the sincerity of the original intent. As with the strategic use of ancient Egyptian iconography by the image industry in yet another American power center, hearts and minds become manipulated and shaped by the agendas of those who wield power through the predatory use of resources from Africa’s Temple of the World.

But perhaps such agendas via the industry’s manufactured and manipulative controlling narratives are how “Set causes Heru,” per the proverb? 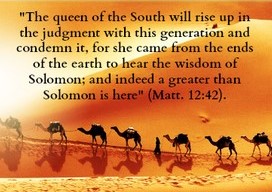 The script must flip back to its original sacred intent as the Goddess of the South rises from Ipet Resyt, &/or when we as individual embodiments of the per-Ankh awaken to our higher free-quencies of life, love & light. Amun… UbuNtu… Blessed Be ❤ ❤ ❤