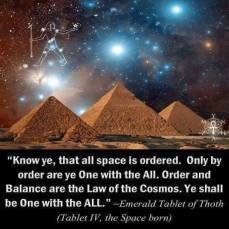 NOTE: The Galactic Codex (paraphrased and reprinted here from various Internet sources) purportedly represents the legal basis for all actions of The Confederation of Light, a collective body said to be made up of this and other galaxies. The Confederation asserts that their Codex is not meant to be a rigid set of external laws but rather meant to represent a systemized code of inner ethics… one that all beings of Light accept with their free will to the extent that it reflects their “inner truth,” allowing a “hostage” planet Earth to finally become liberated from the “Dark Forces.” As with all information from unverifiable sources, use your true inner & highest discernment. [See my ***AFTERTHOUGHTS below & in comments]

Planet Earth is the last planet in this universe under the occupation of Dark Forces, the last relic of galactic wars that raged throughout the galaxy for millions of years. As the Galaxy was being liberated from the grip of Dark Forces, the Forces of Light have been evolving from a military force created in the urgent need to defend basic liberties of sentient beings towards a harmonious galactic and cosmic society. As beings within the Galactic Confederation have evolved spiritually and made their alignment and union with the Ascended Masters, they have discovered an inner codex that regulates all inter-relationships between beings of Light and their relation towards the Dark Forces and occupied planets.

We will now state the Galactic Codex in a form that is understandable to an average awakened being in a human society.

SECTION 1 ~ THE LAW OF DIVINE GRACE

Each sentient being has an inalienable and unconditional right to positive life experience. To explain “section 1” we need to understand that suffering and pain have no value in the enlightened Galactic society liberated from the influence of Dark Forces and other aspects of cosmic anomaly. To value pain, suffering and sacrifice as a part of the growth experience was a part of the programming from the Dark Forces in order to enslave the population of the occupied planets more easily.

Unconditional positive life experience of every sentient being in the liberated universe is guaranteed from the inner connection of every living being with the Source; and strengthened by the power of the Ascended Masters over matter which allows them to assist all living beings in their aspirations towards the Source and provide them with necessities of life. Life was never meant to be hard work and struggle but rather a journey of joy and creativity.

Different subsections of ‘Section 1’ regulate all life in a liberated universe and all relationships between beings of Light so that conflicts never need to occur. Let us explain the subsections:

Section 1: subsection 1 – Each sentient being has an inalienable and unconditional right to physical and spiritual abundance. This subsection guarantees a positive life experience for every being in the liberated universe. The Ascended Masters provide for all necessities of living and for physical and spiritual richness and beauty using the power they have over the redeemed matter of a liberated universe.

Section I: 2 – Each sentient being has an inalienable and unconditional right to Ascension. This subsection explains how the Ascended Masters use their advanced understanding of spiritual technology of Ascension, and by utilizing the Electric Fire of redemption assist all beings that free-willingly choose Ascension.

Section I: 3 – Each sentient being has an inalienable and unconditional right to merge with other beings in proportion with his/her position in the Soul Family mandela. This subsection is an instrument of regulation of all relationships inside a Soul Family. It guarantees the merging of beings of opposite polarity (twin souls, soulmates) and alignment of all other beings regardless of their state of development and outer conditions.

Section I: 4 – Each sentient being has an inalienable and unconditional right to all information. This subsection is a guarantee that all beings receive all pieces of information they need to understand their role in the universe, greater perspective of evolution and all other pieces they need for their decisions, growth and wellbeing. All this data is provided by Ascended Masters or other beings that supervise the evolutions of various races and civilizations.

Section I: 5 – Each sentient being has an inalienable and unconditional right to freedom. This subsection provides that every being has an unlimited potential of growth and life experiences. Since all beings in the liberated universe create only positivism, their freedom never opposes the freedom of other beings.

SECTION 2 ~ THE LAW OF DIVIDING THE CONFLICTING PARTIES

Each sentient being has an inalienable and unconditional right to be divided and protected from the negative actions of other sentient beings. This section regulates the conditions in those sections of the universe that have just been liberated from the influence of the Dark Forces but that have not yet been accepted in the Confederation. It requires that the Forces of Light always divide the parties in conflict to protect them from producing mutual harm to each other. Then the Light Forces mediate the conflict until it is resolved. This section is often used to end wars and other armed conflicts.

SECTION 3 ~ THE LAW OF BALANCE

Each sentient being that has chosen to live and act against the principles of the Galactic Codex and refuses to, or is not able to accept them now and balance the consequences of the past actions will be taken to the Central Sun, restructured into the basic elemental essence and begin a new cycle of evolution afresh. This section regulates the relations between the Forces of Light and the Forces of Darkness. When defeated, beings that belong to the Forces of Darkness are given the opportunity to accept the Galactic Codex, do the best they can to correct the mistakes they made and to live positively afterwards. If they accept, they are forgiven and join the Confederation. If they are unable or unwilling to accept, they are taken to the Central Sun, their personalities and soul essences are restructured with the Electric Fire and their divine spark begins a new cycle of evolution.

SECTION 4 ~ THE LAW OF INTERVENTION

Special cases are planets under direct occupation of the Dark Forces. The Dark Forces usually take the local population hostage to hinder the progress of the Forces of Light. On Earth they have threatened with nuclear war [**] if the Light Forces would intervene. This is the main reason why the Light Forces have not yet liberated this planet (and not the so called “we-will-not-intervene-because-we-respect-free-will… we-will-just-watch-as-the-suffering-goes-on” nonsense). As in any hostage situation, this requires a lot of skillful negotiation and tactical approach. This situation is now being resolved, and planet Earth will be liberated soon.

Section 4: 1 – Each sentient being has an inalienable and unconditional right of calling upon the Galactic Confederation in need and the Galactic Confederation has the right to assist, regardless of local laws. This subsection gives a legal basis for intervention and assistance to all hostages of Dark Forces. The Forces of Light always do the best they can to assist and improve the living conditions of all sentient beings, even on Earth. The situation on planet Earth just indicates how much more power darkness has had over Light on this planet. Fortunately, this is changing now.

Perhaps some humans feel that the Confederation has no right to intervene and that humanity has the right to solve its problems by itself. This is simply not true. Many wars all over the planet and constant abuse of basic human rights have proven that humanity is not capable of handling its own situation. So, it is much better that it receives wise guardians to guide it. The Confederation will give assistance in replacing current masters of the puppets (Dark Forces) that humanity has invited long ago in Atlantis. Then the Galactic Codex will finally become the universal code of ethics throughout the universe and darkness will be no more.

***AFTERTHOUGHTS: 1492?…1619?…1884?… 1948?… Any other ‘SECTIONS’?… ** ‘Nuclear war’ threat = post-1930’s! Lest we forget: “The European world of nationhood is seemingly based on democracy, but it was not built in democracy… Consider their motives and psychology behind the likes of the Magna Carta of 1215; the Westphalian Sovereignty Accord of 1648; Chattel Slavery; American Exceptionalism; the Treaty of Paris 1783; Manifest Destiny; the Berlin Colonial Congress of 1884; the White Man’s Burden; and Globalism of today. Each instance puts their Sovereign Psyche on display…” [Ezra Aharone, The Sovereign Psyche, 2016].

“If the Master teaches what is error, the disciple’s submission is slavery. If he teaches truth, this submission is ennoblement” [Proverb from Ipet-Resyt/Southern Sanctuary of Amun~Mut]. #UbuNtu: “I am, because we are…” ❤ ❤ ❤

5 Comments on “The Galactic Codex”