My father, Eli Nathan Bisamunyu, was born into a poor family in 1928 in a remote region of Uganda before my district’s inclusion in Her Britannic Majesty’s Protectorate of Uganda. He survived childhood diseases such as dysentery and typhus that had killed 13 of his siblings. His unexpected appearance on the scene much later compelled his mother to wish for him a different existence from that which his siblings had not survived. In a pioneering experiment she sent him to school where he distinguished himself as a six-year-old pupil amidst a throng of 15-18 year-old boys. My grandmother Rebecca had hoped that that “modern education,” as it was known, would keep him out of harm’s way.

“Kigezi High School, which began life as Kabale Boys’ School, the earliest school in Kigezi. The buildings in the middle were built by Dr Leonard Sharp after baking his own bricks, one of the trades he taught us for the first time”

After excelling in primary school, he was awarded a bursary for junior secondary school by two Cambridge-educated British medical missionary doctors, who had built the first boys’ and girls’ schools in Kigezi. 400 miles away in the Kingdom of Busoga where he continued his education, my father began a close friendship with another boy, Milton Obote, who had grown up in the distant climes of Northern Uganda.

Previously a shepherd boy like him, Obote and my father had much in common. Both had in their backgrounds devoted missionaries who had inspired them in their education. In 1950, they numbered among the first students to be enrolled in Makerere University College, a degree-granting outpost of the University of London. 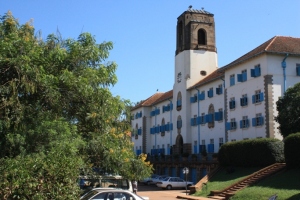 Makerere University College was established 80 years before it was due. Professional British educationists, including a renowned mathematician, Carey Francis, who had been educated at Cambridge before he became a missionary in Kenya, had predicted that Africans in the region would not be ready for university education. Makerere, once formed, soon established itself as an Oxbridge-style magnet in East Africa.

It was at Makerere that the British cultural strand was more tightly woven into the East African social fabric. Friendships that would not have been possible without a British education or English as a medium of communication were forged such as the one between the group known as the “Three Bs:” my father, from the non-monarchic and little known Kigezi District in SW Uganda; Barlow, from the central Kingdom of Buganda; and Bigirwenkya from the western Kingdom of Bunyoro. Their friendship symbolised a wider cooperation in a nation based on an entirely British concept. By the mid-1960s, scholars of the calibre of V.S. Naipaul and Paul Theroux were forging friendships there.

From this tower of learning, inspiration flooded Uganda, Kenya, Tanganyika, Zanzibar, Malawi, Sudan and other countries. Children from missionary stations, where “church schools” similar to those that had nurtured my parents, arrived as men and women at Makerere. Drawing on the goodwill of lecturers from Oxford, Cambridge, London, Edinburgh and many other universities in the British Commonwealth, Makerere had adequate student ambition to grow from strength to strength.

In 1953 my father graduated from Makerere, becoming the first student in the history of Kigezi to do so. An avid student of Political Science, Literature and History, he became a founder of the country’s first political party. My parents married on 1 January 1955 as my father relinquished his reins as a British Government civil servant and embraced African politics. In 1957, after serving in the Secretariat of the Governor of Uganda, he became a member of the Uganda Legislative Council.

On 9 October 1962 Uganda, dear to the heart of the British Empire which from 1856 to 1866 had commissioned explorers to search for the source of the River Nile, gained its independence. Its future and former leaders sat in a vast pavilion on Kololo Hill, part of the network of hills that comprise a home for Uganda’s capital city, Kampala. Included in that pavilion were some of the first graduates of Makerere University College in their newly attained government capacities, including the Three Bs. My father was set to join Parliament as a member of the majority party, led by his erstwhile school friend, Milton Obote. 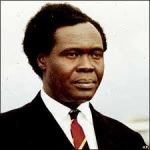 For the next ten years, with periodic squabbling over President Obote’s growing fondness for autocratic rule, the government built more schools and hospitals up and down the country without foreign aid, bettering policies and programs initiated by some of the most benevolent British Governors in Uganda’s colonial history. My mother, with rare education, would be summoned by telegram from remote villages where she taught to join Prime Ministerial delegations to China, India, Japan, Singapore and Yugoslavia while my father focused on his parliamentary work.

There are many narratives of policy and politics in colonial history but none of them mean so much to me as the personal ones. It is their power and inspiration that led me from our little town in Kabale, Southwest Uganda, into the wide world of diverse histories and languages.

AUTHOR NOTE: Edward Nobel Bisamunyu was born in Uganda on 18 July 1957 to two former students of “church schools” of the British Church Mission Society (CMS), whose members transformed East Africa. He attended schools in Uganda and Kenya before reading for degrees in Biology and English at Kent State University, Ohio. Later, he joined Harvard University as a Research Assistant in medical and biological research while teaching Kiswahili at Boston University. In 1996, following his mother’s death, Edward returned to his historical roots in the British Commonwealth by moving to England to spend some time with his godmother, Lilian Clarke, an Englishwoman who had a substantial role in his mother’s education. Today, Edward teaches Chemistry in the pre-university Sino-Canadian Program in Henan Province, China. Edward has recently published the first book of grammatical analysis of his language, Lunyankole-Lukiga. His interests include mountains, reading, tennis, travelling, photography and piano.