Queen Nyabingi is one of several likely inspirational fonts for Marvel’s comic book renderings of Wakanda’s Dora Milaje, an elite group of female bodyguards who will soon be slaying on the silver screen [2/16/18] in Ryan Coogler’s directorial rendition of Black Panther – the movie. Though fictional, Marvel’s African kingdom of Wakanda is geographically situated around the source of humanity’s genesis, which happens to be where the legendary Nyabingi greatly impacted history as well as our pathways to a pan-African consciousness. A real-life fusion of warrior-queen archetypes that arose in the ancestral Nile River mythologies of Khemet, Goddess Nyabingi’s spirit also lives in the diffusion of beats and flows that birthed hip-hop in today’s diaspora.

Best known for fiercely championing her spiritual, cultural, and political spheres of power through liberation struggles against the Euro-patriarchal rape of her region – rubberstamped at the 1884 Berlin Conference and euphemistically referred to in history books as the “scramble for Africa” – Nyabingi fought hard against her colonial adversaries. In Khemet, this collective adversary was known as Seth (god of the wilderness, storms, chaos, violence, famine, illness and foreign oppressors) who was so jealous of Ausar’s richly-endowed kingdom and popular reign that he murdered, mutilated and then scattered pieces of the king’s body [diaspora of enslavement] in order to ascend the throne and sow his dehumanizing brand of chaos in the name of progress…

Against this quintessential enemy of Africa and usurper of her resources, Nyabingi also becomes a force of reparations whose shamanic powers are transmitted through oracular healer-priestesses, traditionally called bagirwa. In this role, she is reminiscent of the Khemetic goddess Hathor whose fervent warrior aspect is identified in the leonine goddess Sekhmet. Nyabingi’s shamanic powers also mysteriously link her to Seshat, a Khemetic goddess whose characteristic dress is made of panther skin. Historically, spiritually-endowed women have stood out as leaders of liberation movements throughout the African continent – in part because, like rape, imposed rule has infringed upon the domains of the divine African feminine. Ideological descendants of parasitic shadow-queens such as Victoria [“grand-mother of Europe” 1837-1876] and/or the neo-colonial sychophants who uphold their standing in Africa’s sacred geographies and imagination, are complicit in the continuing rape of humanity’s Mother[land].

Goddess Nyabingi’s legend begins in Mpororo (Uganda’s southern region) where Queen Kitami’s rule was disrupted with the theft of her sacred drum by a man named Kamurari. Though Kamurari used the sacred drum to found a dynasty, it was the formidable ancestral presence of Queen Kitami upon whom the reverent title of ‘Nyabingi’ was bestowed by successive generations.

Nyabingi’s compelling presence was deeply acknowledged as she spoke paranormally with and through her chosen female prophets and priestesses from behind the bark-cloth veils they wore.

By the time of Welsh-American journalist and explorer Henry Morton Stanley’s search for the source of the Nile River in the late 1800s on the heels of British explorer David Livingstone’s efforts, Goddess Nyabingi had earned a reputation in the colonial imagination as a “great sorceress.” Her priestesses exercised considerable political power in the Uganda/Rwanda [‘Wakanda’?] borderlands through such acts as collecting tributes from local chiefs. British and German colonials waged war against African women by making alliances with corruptible men, including these same local chiefs. One such example was the alliance they made with Mwame Musinga which led to his treacherous usurping of the throne that the widowed Rwandan queen-mother’s son – like Heru of Khemet through queen-mother Auset – was heir to. 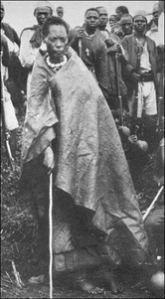 In 1911, a rebel priestess named Muhumusa formed a spiritually-based military resistance against the wazungu (Europeans) in the name of Nyabingi. So effective was this resistance that the British fought back by passing the 1912 “Witchcraft Act” which threatened to burn the accused at the stake. Muhumusa’s eventual capture in 1913 led to her detention for life which ended with her death in 1945. However, other popular Nyabingi-inspired revolts such as the 1928 Rebellion arose from what a wazungu colonial described as “armed witchcraft dances,” resulting in the killing of colonial-puppet chiefs. “These fanatical women are a curse to the country!” a colonial commissioner was led to declare as the resistance leaders successfully fought and evaded capture.

These warrior-queen-led uprisings were gradually suppressed through a collaborative colonial team effort involving coercive missionaries who would impose Christian baptism onto Africans under threat of punishment as political subversives of the Nyabingi resistance. Eventually, the reparations or healing aspects of the bagirwa’s cultural role regained precedence over the political-warrior dimension of the black freedom struggle.

By the 1930s the Nyabingi resistance had been effectively subdued in East Africa. However, it had caught fire in the Jamaican Rastafari movement which began with Europe’s colonization of Africa – AKA ‘Ethiopia’ and/or ‘Zion’ to believers – though the forced exile of enslaved Africans scattered throughout ‘Babylon’ dated back to centuries prior. The Honorable Marcus Mosiah Garvey Jr.’s 1920s prophecy – “Look to Africa where a black king shall be crowned; he shall be your Redeemer” – set the stage for how Jamaicans would come to regard the 1930 coronation of Haile Selassie as Emperor of Ethiopia (a neighboring East African country which had itself successfully resisted European colonization attempts). A member of the Solomonic Dynasty, Selassie was born Tafari Makonnen Woldemikael – hence the Ras-Tafari designation and belief in him as the prophesied messiah, Jah Rastafari or alternatively Lion of the Tribe of Judah. Though His Imperial Majesty, Emperor Haile Selassie, was welcomed with great enthusiasm during his 1966 visit to Jamaica, he was eventually dethroned [9/12/74] back in Ethiopia for reasons which began with the famine his country suffered in 1973.

The oldest of the Rastafarian subgroups is Nyabingi – a name which the Jamaican group believe to mean ‘Death to all Oppressors’ – connecting their faith with the African warrior-queen’s powerful spirit of liberation from tyranny. The Rastafari chant ‘bingi’ through prayer, music, dance, and biblical reasonings, calling on nature and the universe of her mystical powers to destroy the wicked reign of ‘Babylon’ – as they believe Jah alone has the right to do – and establish their New Jerusalem or Zion in Africa. In Jamaica, Nyabingi’s rhythmic heartbeat is played by men on a trinity of drums: Thunder (a bass drum also referred to as the “Pope Smasher” or “Vatican Basher”); Funde (the middle drum which maintains the dominant heartbeat and has the least improvisational role); and Akete or Repeater (the smallest, highest pitched drum that plays the most improvisational role as carrier of spirit). 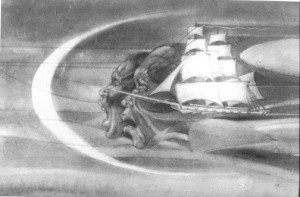 Parallels between Nyabingi‘s prototype sacred drum, and its usage in East Africa can thus be interpreted and understood in the purpose and symbolism of Rastafari expression in the Caribbean. The natural and spiritual forces which connect Nyabingi in the pan-African consciousness also pulse and flow through her waterways: the northbound Nile River from its Great Lakes’ cradle to its ancient flowering in Khemet (known as the Gift of the Nile); and the waterways which map the Atlantic slavery routes with each hurricane that forms off of the West African coast, wreaking destruction at what some consider to be Babylon’s doorstep… “Many waters cannot quench love, neither can the floods drown it…” [SoS 8:7 KJV]

Seminal to the music of Rastafarians, Nyabingi drumming is the same powerful heartbeat pulsing in the reggae stylings of such renowned artists as Bob Marley, Peter Tosh, Black Uhuru, Steel Pulse, Burning Spear, and many others who came up through the faith – rocking locs like the warriors in Kenya’s struggle for uhuru (freedom) against Britain’s colonial rule. Indeed, reggae’s popularity in the 1960s and 70s brought Rasta consciousness to the global masses, which worried those who did not want their liberational cultural faith (mis)appropriated and/or corrupted.

Such reckonings came out of lessons learned from Babylon’s predatory and parasitic dealings against its African host(ess), including: spiritual resources from Khemet having been re-scripted and weaponized through the work of missionaries in their colonial rape or ‘scramble’ for Africa’s natural resources;

the twin-enterprise of slavery through which Africa’s human resources had been stolen and displaced in the so-called New World; as well as the appropriation of her cultural resources. In the Caribbean-Bronx [NY] alchemy which created hip-hop’s seminal heartbeat [through DJs such as Kool Herc], one feels Nyabingi’s continuing struggle to drive that final, fatal stake through the vampire’s collective… heart [???]. Nyabingi reminds us to not be complicit in the rape against the dominion of the divine African feminine, the spoils upon which ‘Babylon’ has built its arrogant and twisted sense of superiority and entitlement. #UbuNtu… #ReparationsNow

15 Comments on “Nyabingi ~ Oracle of the Drum & Warrior Queen”